Anodized sheet aluminum have been increasingly used in daily life, and their functional and decorative requirements are also increasing. The anodized film of the aluminum sheet plate has a unique honeycomb structure, and can utilize its strong adsorption ability, and then obtains various vivid colors and improves the corrosion resistance and wear resistance of the film through a certain coloring and sealing treatment. 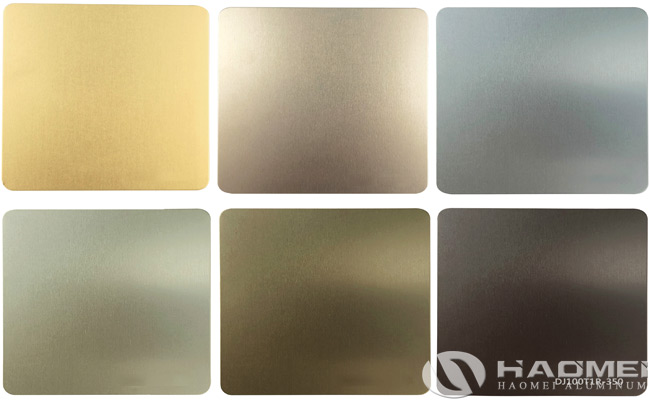 The main methods for coloring anodized aluminum sheets are:

1, Adsorption coloration, that is dyeing with organic or inorganic dyes.
Inorganic pigment coloring is carried out by using an inorganic salt, and the mechanism is physical adsorption, that is inorganic pigment molecules are adsorbed on the surface of the micropores of the anodized aluminum sheet membrane layer and filled. Inorganic pigments have good coloring resistance, but the coloring tones are not bright and have poor adhesion to the substrate.

3, Natural color development, the aluminum sheet is colored at the same time as formed the anodized film, and no dyeing is required.
The above comparative analysis shows that electrolytic coloring is the best quality coloring process in the industry. Through special chemical reactions, the color is uniformly and stably fused with the oxide film, and the physical adsorption is more stable than the inorganic pigment, and the color tone is excellent.

The color anodized sheet aluminum is colored by electrolysis. The source of the color is the embodiment of a certain metal atom, and is perfectly integrated with the oxide film. As long as the oxide film is in, the color will not fade and the color is stable and lasting.